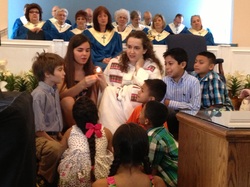 A  lifelong Presbyterian, Becky was born in Metairie, Louisiana and moved to Spring, Texas, at the age of six with her parents and her sister Annie. She grew  up in Spring and graduated in the first graduating class of Klein Oak High  School.   After  four years in Pennsylvania, where Becky graduated from Haverford College, she was ready to get back to Texas. She spent a year working at Mo-Ranch in the  Environmental Leadership Program. It was there that she discerned a call to go  to seminary.

On her second day at Columbia Theological Seminary in Decatur, Georgia, she met her future husband, Mark Downs. Mark had finished his first year in seminary  already, so of course he “knew everything she needed to know”. Three years later they were married at Mark’s home church near St. Louis, Missouri, and they were off to answer his first call to ministry in Sioux Falls, South  Dakota.

After a couple years of freezing in the Great Plains, they returned to Texas where Mark became the pastor of First Presbyterian, Alvin, and Becky started work at Southminster Presbyterian in Missouri City as Minister of Congregational Life. It was an eventful time in their lives as their first child, Lizzie, was born, and shortly thereafter Mark was diagnosed with cancer. He has been cancer-free since 1999!

In 1999 the Downs family moved to Chattanooga, Tennessee. Becky was ordained to be  pastor at Northminster Presbyterian Church in January, 2001. Their second child, Kate, was born in 2003. By 2007 they were again ready to be closer to the family, so they moved back to Houston. Mark works in Essential Hospice as a chaplain, and also pastors Oaks Presbyterian Church.  Becky came to John Knox in August of 2011.

Becky, Mark, and Kate share their home with Becky’s mom, Donna Ardell, as well as a flock of pets. Kate is a student at Spring Woods High School, and Lizzie is working as a teacher in Dallas.  They are blessed to live close to Becky’s dad and stepmom, Bob and Lee Ardell, as well as sister Annie and Annie’s two children, Nic and Shelby.

Katie was raised in Missouri City, TX. After graduating from the University of Mississippi, she spent the next 11 years teaching first, fourth, and fifth grades at private schools in Houston. She married her husband, Allen, in 2017 and they have one daughter, Collins, born in 2019. They moved to the Spring Shadows neighborhood in 2017. Working at John Knox Presbyterian Church has been a wonderful opportunity to get to know the members in the community.

She loves spending time with her family and friends, traveling, watching and playing sports, and getting outside with her dog, Murphy.